This is Trans Awareness Week, so to celebrate, today’s snippet is taken from my novel Out! (3rd in my series of romantic comedies, The Shamwell Tales – and I’m also celebrating finishing writing #4, which has the provisional title of Spun! and should hit the shelves sometime in 2017). Out! features as a secondary character Lex, who is non-binary and uses they/their pronouns.

Here’s Lex musing on relationships to Patrick, who they work with:

“I just think you never see what people are really like before you go out with them, so you might as well get on with it. Saves time, dunnit?” Lex looked up, face earnest. “And well, before you go out with someone, you sorta build them up in your head, don’t you? Like, you start thinking they’re all brilliant and well fit and stuff. So when you finally go out with them, yeah, and they’re just like a normal person who farts in bed and picks their nose, right, you’re gonna be way more disappointed than you would of if you’d just gone out with ’em straightaway.”

Lex looked at him thoughtfully. “Nah, s’pose not. You’re more the he’s a wanker until proven innocent sort.”

And there’s still time (until around Sunday teatime) to enter the draw to win an e-copy of Out!, which you can do by leaving a comment on my post over at Trans Fiction Week: Gun Control. 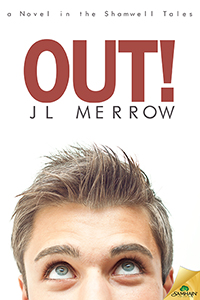 When the costs are added up, will love land in the black?

Mark Nugent has spent his life in the closet—at least, the small part of it he hasn’t spent in the office. Divorced when he could no longer deny his sexuality, he’s sworn off his workaholic ways and moved to Shamwell with his headstrong teen daughter to give her a stable home environment.

His resolve to put his love life on hold is severely tested when he joins a local organization and meets a lively yet intense young man who tempts him closer to the closet threshold.

Patrick Owen is an out-and-proud charity worker with strong principles—and a newly discovered weakness for an older man. One snag: Mark is adamant he’s not coming out to his daughter, and Patrick will be damned if he’s going to start a relationship with a lie.

Between Mark’s old-fashioned attitudes and a camp, flirtatious ex-colleague who wants Mark for himself, Patrick wonders if they’ll ever be on the same romantic page. And when Mark’s former career as a tax advisor clashes with Patrick’s social conscience, it could be the one stumbling block they can’t get past.

Available in ebook and paperback:    Samhain | Amazon | ARe