Guest blog by Josephine Myles–What’s in a Name?

I’m delighted to have my very good friend Josephine Myles here today, as part of her blog tour to celebrate the release of her sexy, funny, romantic m/m novel Barging In.  Jo and I first met in the flesh in a gay pub in Bristol, where we were plugging the charity anthology I Do Two, but we’d known each other online for some time by then – as well as being a talented writer, she’s a fantastic beta, without whom many of my stories wouldn’t have been half so good!

She’s here today to tell you about a subject which is dear to many a writer’s heart: the choosing of names. But she’s not talking about characters – at least, not human ones…

What’s in a name?

More specifically, what’s in a boat name? When writing Barging In I not only had to choose appropriate names for all the characters, but I had to choose names for their boats too. This resulted in much pondering as I tried to decide whether the owner of the boat would have inherited a name when they bought it, or whether they would have renamed it themselves. If so, what kind of name would they give it?

My husband and I once lived on a narrowboat called Mithrandir (don’t laugh). Yes, that’s Gandalf in Elvish. I might have enjoyed Tolkien as a teenager, but I was well past my fantasy stage at this point. We inherited the name from the previous owner and we’d have changed it if we could, but was informed by all the other boaters that it was very bad luck to rename a narrowboat unless she was out of the water. Even then, there was a certain protocol: you had to remove all trace of the previous name from both inside and out, before a ceremony when you gave the boat her new name.

Now, I’ve never been superstitious but there’s something about living on a boat that encourages that sort of magical thinking. Perhaps it’s because your whole home is floating and there is only a thin steel hull between you and all that cold, murky water. Also, we really didn’t want all the seasoned boaters to be tutting and shaking their heads as we violated one of the unwritten rules of the canal. 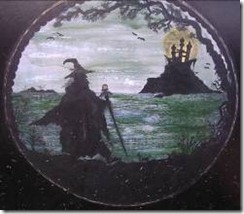 Seeing as how we didn’t really fancy cruising to the nearest dry dock and repainting the boat, we temporarily abandoned the idea of renaming her. After all, everyone along the canal called her "The Witch" anyway, because there was a rather poorly executed silhouette of Gandalf on the side. I could live with being on The Witch. It was better than Mithrandir.

One thing’s for certain, though: boats develop personalities and you can find yourself starting to think of them as people. Clearly they need a name that suits them. Also, boaters will always refer to you with your boat name when mentioning you to other canal folk, so I was known as "Jo on The Witch". Some boaters even end up getting nicknamed with their boats, and I’ve written a short story recently with a character called Ratty, who lives on River Rat.

Fast-forward six years and I was sitting by my computer, desperately trying to think up an appropriate boat name for Robin. I knew that he’d fitted her out himself, so I assumed he’d have chosen her name too. What kind of name would a surly, rebellious, glass-is-half-empty kind of guy call a boat? Clearly not something serene like Serendipity… wait a minute – that’s it!

I’m still not entirely sure why Serendipity stuck when it seemed so contrary to Robin’s outlook, but for some reason it felt right. Then, halfway through writing the novel I discovered the exact circumstances that led Robin to choose the boating life, and I realized that the name was a symbol of his new hope at that time.

The other boat names were more fun to play around with. Robin’s hippy friend Mel ended up on Galadriel – an elvish nod to my own Mithrandir – and Dan cruises in on a hire boat named Faerie Queen, much to his chagrin. It’s just so hard to resist a bad boat name joke!

To finish off, here are a few of the more strange, amusing and possibly offensive narrowboat names I’ve heard of: Hypoxia, Tickety Boo, A Waste of Time, W. Anchor, Canalgeisic, Up Yaws, R Sole, The Onion Bargee, Don’t Panic, Sir Osis of the River, My Overdraught, Fat Geezer, The Office… I could go on and on!

When the boat’s a rockin’, don’t come knockin’!

Out-and-proud travel writer Dan Taylor can’t steer a boat to save his life, but that doesn’t stop him from accepting an assignment to write up a narrowboat holiday. Instead of a change of pace from city life, though, the canal seems dull as ditchwater. Until he crashes into the boat of a half-naked, tattooed, pierced man whose rugged, penniless appearance is at odds with a posh accent.

Still smarting from past betrayal, Robin Hamilton’s “closet” is his narrowboat, his refuge from outrageous, provocative men like Dan. Yet he can’t seem to stop himself from rescuing the hopelessly out-of-place city boy from one scrape after another. Until he finds himself giving in to reluctant attraction, even considering a brief, harmless fling.

After all, in less than a week, Dan’s going back to his London diet of casual hook-ups and friends with benefits.

Determined not to fall in love, both men dive into one week of indulgence…only to find themselves drawn deep into an undertow of escalating intimacy and emotional intensity. Troubled waters neither of them expected…or wanted.

Available now from Amazon and Samhain.

English through and through, Josephine Myles is addicted to tea and busy cultivating a reputation for eccentricity. She writes gay erotica and romance, but finds the erotica keeps cuddling up to the romance, and the romance keeps corrupting the erotica. She blames her rebellious muse but he never listens to her anyway, no matter how much she threatens him with a big stick. She’s beginning to suspect he enjoys it.

COMMENT TO WIN: All comments during the Barging In blog tour will be entered into a prize draw for a 10″x7″ signed and mounted print of my photograph of the Kennet and Avon canal, near Bath – as used on the cover of Barging In! What’s more, the stretch of canal shown here is the very part where Dan first crashes into Robin – ah, happy memories!

The more comments you leave, the more chances to win. Please remember to leave your email address in the body of the comment so I can get in touch with you. I’ll make the draw on 2nd October, 9pm GMT, so you have until then to leave your comments

1 Response to Guest blog by Josephine Myles–What’s in a Name?