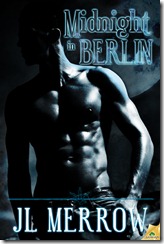 Hurrah! Midnight in Berlin is now available to purchase!

The hookup from hell…or the ride of his life?


Leon’s drifter lifestyle gives him the freedom to attend as many music festivals as his heart desires. Even the ones that leave him covered in feathers. Wet feathers, thanks to the rain as he hitchhikes back to his hostel. When he’s offered a ride by a good-looking man in a Porsche, Leon thinks it’s his lucky night. Until he discovers his savior from the storm hides a dark secret: he’s a werewolf.
At first glance, Christoph thinks the shaggy stranger walking Berlin’s streets is a rogue werewolf. By the time he realizes his mistake, it’s too late for both of them. Forced to turn Leon into a monster to save his life, Christoph still has to suffer his pack leader’s brutal punishment for endangering them all.
Leon awakens, horrified by what he’s become—but it’s his lover’s fate that spurs him to action. Freeing Christoph is easy, but the aftermath complicates everything as they go on the run, desperate to uncover the secrets their pack leader is hiding. Secrets the pack will kill to protect…

Take a trip to Europe. Soak up the local culture, meet a creature from your worst nightmares. Contains werewolves behaving badly, clothed and unclothed. Author is not responsible for unexpected, uncontrollable urges to consume massive amounts of, um, bacon.

And the winner of the giveaway is: whitestar_alpha! Congratulations!

If you drop me an email at jl(dot)merrow(at)gmail(dot)com, and let me know your preferred format, I’ll get that right off to you. Thanks to everyone who played!

2 Responses to Midnight in Berlin–out now!