Tackling Homophobia where it counts: in the Classroom 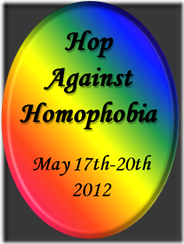 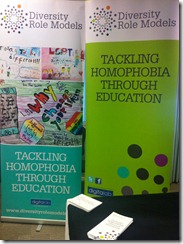 Today, May 17th, is International Day Against Homophobia.

Two thirds of LGBT kids and teens in Britain suffer homophobic bullying in school. They are three times as likely to commit suicide as a result.

Straight kids suffer too—either from fearing to be open about LGBT friends and relatives, or from pressure to conform to gender stereotypes.

Kids pick up on prejudiced attitudes from all sorts of places—and all too often, they lack a positive LGBT role model in their lives.

I’d like to share with you some of the work being done to change this by Diversity Role Models. DRM is a registered charity that was set up following the suicide of a fifteen-year-old boy who was bullied because he was perceived to be gay.

The charity sends speakers – “Role Models”- into schools to run workshops on the subject of homophobia. The Role Models speak frankly about their own lives, answer questions, promote discussion—and show the kids that LGBT people really aren’t any different from anyone else. 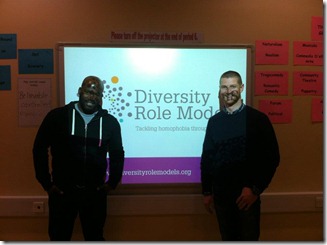 The results they achieve are truly outstanding.

Meeting role models who explain their experiences and life stories helped many of our students understand the bullying and difficulties that many LGBT people face as they make the journey to adulthood.  This process of ‘usualising’ being LGBT allowed many students to question previously held beliefs and develop their confidence to reject and challenge the casual use of ‘gay’ as a term of abuse…

Since the workshops, many of the students who attended them have talked to staff about diversity and difference – and are clearly opposed to the discrimination against LGBT people that still exists in British society – Assistant Head, South London Secondary School 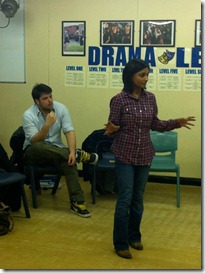 The role models were a complete revelation ranging from an actor in a well known TV soap to a senior vice- president of a major bank. They talked about their experiences and answered questions with ease.
The students got so much from it but gave a lot to the session too. They were open about their feelings and thoughts on a range of issues and talked about the experiences in their lives and families – Assistant Head, North London Secondary School

You can see what the students think about the workshops here – sample comments:
“before I thought gay people and lesbien (sic) people are disgusting now I don’t, I think there the same people as others”
“before I was a little scared and uncomfortable but now I feel better”

The results speak for themselves:
In schools where homophobic bullying is tackled, LGBT students are 60% less likely to be bullied.

Diversity Role Models, a charity launched last year to tackle homophobic bullying in schools, announced today 94.5 percent of students who took part in a workshop with a positive role model said they would treat LGBT people better as a result.

Similarly, 91 percent of students filling in the feedback questionnaires after a workshop said they would try to use the word ‘gay’ in a pejorative way less often in future – Pink News, 2nd May 2012.

This work needs funding. If you, or perhaps the organisation you work for, can afford to commit to a monthly donation to Diversity Role Models, it will be invaluable in helping them increase the number of workshops they can run. Any gift will be very gratefully received, and will make a difference in young people’s lives.

Every penny helps us put role models in front of young people. This can save lives

If you are able to help, please donate at: http://www.charitygiving.co.uk/donate/diversityrolemodel

I’m offering a giveaway for the Hop Against Homophobia  – this is separate from the Hard Tail blog tour giveaway.  The prize: winner’s choice of any 2 e-books from my backlist (see my website for a list). All you need to do to enter is send me an email on jl(dot)merrow(at)gmail(dot)com with DIVERSITY ROLE MODELS in the subject line.  I’ll make the draw on 21st May, at around noon, GMT.

4 Responses to Tackling Homophobia where it counts: in the Classroom