If you’d like a chance to win a copy of Dead Shot, my short story due to be re-released in its spiffy new cover on August 26th, head on over to Stumbling Over Chaos where the lovely Chris is offering a free copy!  Just leave a comment to be entered into the draw.

Here’s a little excerpt to whet your appetite:

If you ask most people about Cupid, they’ll tell you he’s this chubby little angel with curly blond hair and a bow and arrow.

And they’re right about the chubby little face. And the bow and arrow, for that matter. But the hair’s ginger, not golden, and he goes by the name of Kevin these days, and an angel he most definitely is not. In fact, you can’t take your eye off him for a minute, which I found out the hard way when I took him to the park the other day.

Okay. Confession time. I’m actually talking about my nephew, who as far as I’m aware doesn’t have any Greek gods in his ancestry, although my sister Carol says his dad was working in a kebab shop when they started living together, so who knows? Anyway, Kevin’s what’s known as A Bit of a Handful. Ten years old, scarily bright but with the attention span of a toddler. So at weekends I try and take him off Carol’s hands for a while. Give her a bit of time with her new husband, Mark, who as far as I’m concerned is an absolute saint for taking on Kevin and treating him like his own. And the baby, of course. Now she is cute and golden-haired. And possibly angelic, although to be honest it’s really too soon to tell.

So this Saturday, we went to the park, Kevin and me. And I showed him how to make a bow and arrows from sticks we found lying around, and set up some targets of old Coke cans for him to aim at. Now I know what you’re thinking, but I wasn’t stupid. I made sure he heard the awful story of How Grandpa Lost His Eye and got him to promise never to aim anywhere near people. And then I sat down on a park bench and closed my eyes for five minutes because I’d had a late night on Friday and, although I love Kevin dearly, he’s more than a bit exhausting.
It was right after that I heard the scream.

Well, more of a shout, really. Then a dog started barking and a reedy little voice piped up, “I didn’t see you there, honest I didn’t!”

By now my eyes were well and truly open, of course. Even before the wail of “Uncle Peeeeter!” was ringing in my ears I’d jumped up from the bench. I legged it over to where I could see Kevin, a frisky-looking border collie and, last but not least, a tall, dark-haired bloke rubbing his right buttock.

You didn’t have to be a genius to work out what had happened. “Kevin! Did you shoot this man in the …” I stopped there. It was daft, really, I knew Kevin knew all the words, and he knew I knew, but I still didn’t like to use them in front of him.

For a chance to win a copy, go here. Good luck!

And in other news… our back garden is clearly an up-and-coming address for the local duck population. After years of being spurned by our feather-brained friends, we now have our second brood this summer – eleven, this time, all cutesy, fluffy accidents waiting to happen. Any tips on how to get them safely down to the river a couple of streets away will be gratefully received… 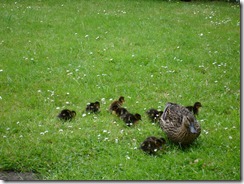