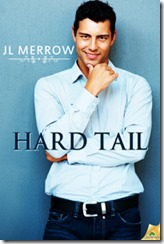 Yes – for all you reluctant e-readers, Hard Tail is now available in traditional, touchy-feely, scratch-and-sniffy, dead tree format! *pets it*

It’s available at a reduced price for a limited time at the Samhain site here – but psst! It’s even cheaper at Amazon.com (or here for fellow Brits).

Finding love can be a bumpy ride.
His job: downsized out of existence. His marriage: dead in the water. It doesn’t take a lot of arm twisting for Tim Knight to agree to get out of London and take over his injured brother’s mountain bike shop for a while. A few weeks in Southampton is a welcome break from the wreck his life has become, even though he feels like a fish out of water in this brave new world of outdoor sports and unfamiliar technical jargon.
The young man who falls—literally—through the door of the shop brings everything into sharp, unexpected focus. Tim barely accepts he’s even in the closet until his attraction to Matt Berridge pulls him close enough to touch the doorknob.
There’s only one problem with the loveable klutz: his bullying boyfriend. Tim is convinced Steve is the cause of the bruises that Matt blows off as part of his risky sport. But rising to the defense of the man he’s beginning to love, means coming to terms with who he is—in public—in a battle not even his black belt prepared him to fight. Until now.
Warning: Contains an out-and-proud klutz, a closeted, karate-loving accountant—and a cat who thinks it’s all about him. Watch for a cameo appearance from the Pricks and Pragmatism lovers. May inspire yearnings for fresh air, exercise, and a fit, tanned bike mechanic of your very own.