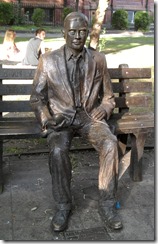 If you’ve been reading other blog posts about the 2013 UK Meet you’ve probably met this guy already, but I couldn’t resist putting in my own pic of the statue of Alan Turing in Sackville Park in the centre of Manchester. I find it unbearably poignant that the statue includes the poisoned apple he used to end his own life – and hugely uplifting that the statue is regularly enhanced with nail polish, flowers, etc by members of the GLBTQ community. When we saw him, he was sporting eyeshadow courtesy of the Sparkle trans* crowd, who had their annual event in the park over the same weekend as UK Meet. Manchester was buzzing – and very glamorous!

This was one of the stops on the gay history walking tour around 50-60 of us went on, which also took in locations from the original Queer as Folk. Last stop was at Gaydio, the UK’s FM gay radio station, where our guide, the lovely John Ryan, works. He played us snippets from a documentary about Manchester’s gay history, in which members of the community tell their own, often very emotional story.

If you’d like to listen to the full documentary, you can download it (and others, including one about the women’s scene) at Your Story.

I should probably write a little about the Meet itself, but I’m still reeling from the incredible experience of meeting so many readers, bloggers and writers of GLBTQ fiction! It really was wonderful to see you all – everyone was so friendly and ready to help out. Thanks to everyone who attended for making the Meet such a success.

One person I regret not getting much of a chance to talk to is Julie Bozza. I’m definitely going to be checking out some of her books, which look very interesting indeed. She’s done a great write-up of the Meet and many of the panels which I recommend you take a look at if you want to know what you missed (or, you know, if like me you were too lazy/disorganised to take your own notes)!