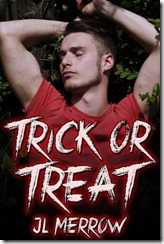 Fancy a sexy, spooky short to get you in the mood for Halloween? Well, Trick or Treat, previously published under the title Through a Western Door in a Torquere Press Scared Stiff Taste Test, will be reissued soon as a standalone ebook from JMS Books:

But in the meantime, you could be in with a chance to win a free copy – all you have to do is pop over to Stumbling Over Chaos and leave a comment on the giveaway post! Simples!

The memory of this party could haunt him forever…

Dragged along to a haunted house by his mates, Sam’s at the Halloween party from hell—the guy he fancied has turned out to be a bigot, and Sam has just outed himself to  his whole football team.

Escaping to the garden, he meets James, an enigmatic stranger with a mischievous smile, and the evening soon takes a turn for the better. The night may be chilly but the heat between Sam and James is hotter than Hades.

But James has a role to play in the evening’s ghostly entertainment, and it’s a story with a deadly ending. Unless Sam can change the script and stop history repeating itself, “till death do us part” will come sooner than he thinks.

2 Responses to Trick or Treat?