Chance to win a copy of Making it Pay 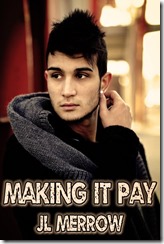 The ever-obliging Chris from Stumbling Over Chaos (go for the giveaways; stay for the linkity and Misadventures in Stock Photos) is offering a chance to win a copy of my short story Making it Pay, due out from JMS Books 16th November.

All you have to do to enter the draw is leave a comment on the giveaway post.

And here be the blurb:

Sometimes you can’t see the silver lining for the clouds…

Abandoned as a baby and now working as a rent boy, Daniel finds it hard to let people get close to him. But nightclub bouncer Rob has a kind face and he’s helped Daniel out once already, so when he catches Daniel on a bad night, Daniel accepts his offer of money and goes home with him.

Even though it breaks his heart.

Letting Rob pay him for sex may have wrecked their friendship just when Daniel needs all the friends he can get. But there are more reasons than one why he hasn’t seen Rob since that night—and one in particular that makes building a relationship seem almost too much to hope for…

Note: this short story first appeared in the Dreamspinner Sindustry anthology, now out of print, under the title Sunshine. The story has been fully revised and re-edited, and is around 10% longer than the previously published version.