And then Liam Livings happened… 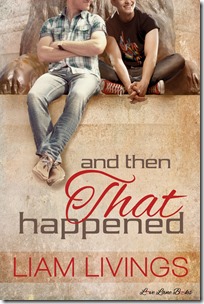 I’m delighted today to welcome the lovely Liam Livings, one of my fellow UK Meet Organisers, who’s here to answer a few questions about his new book, And Then That Happened, and give us a sneak peek at it!

LL: Gabe was such fun to write, he’s absolutely the opposite of me – he’s totally fearless, just jumps in and gets on with things, he also doesn’t pull the punches when he gives people advice, he’s basically very uninhibited in every way. It was great to write his advice to Dominic, and the way he leads them on fearlessly to the next adventure, or past the next obstacle.

Dave, Dominic’s dad, was tremendous fun to write too. He’s not had an easy early relationship with Dominic, but as time has passed, they’ve grown closer, and are able to talk about those more awkward things dads and their sons can’t always talk about.

Excerpt – Dominic and his dad talk about his boyfriend, Luke

‘What’s that got to do with the price of cheese?’

‘That one, with the thin one, learns to talk proper, flower girl. Move your bloomin’ arse.’ He snapped his fingers. ‘My Fair Lady. She loved that film. Course, now I expect she says it’s some highbrow one with French subtitles, but definitely when we was together, courting, married, that’s what it was.’

I told him about the Goldie Hawn film Luke hadn’t taped. He listened, rolling another cigarette with the gondola, which distracted me a bit, but also provided a bit of light relief from the awkwardness of telling my dad about my love life, and the sadness of remembering how I felt when he told me he hadn’t taped it.

‘…you lived at the bottom of the garden in a paper bag.’

‘No need to take the piss, Dominic. You’re not too old to get a slap.’ He saw the look in my eyes change in an instant and realised what he’d said. ‘You know I don’t mean it, son.’

‘Anyway, when you were a lad…’

‘But you knew her favourite film.’

JL: I tend not to cope very well if I haven’t got a writing project on the go! How long can you go without doing any writing/editing etc before getting twitchy?

LL: A week. I’ve had a few weeks abroad for holiday this year when I was banned by my BF from taking my laptop – he wanted me to have a proper rest especially from keyboard time. Even during those weeks I took my notebook and made notes and thoughts about pieces of conversation I’d over-heard, things I’d read in books, phrases I liked from films, so I’m always observing, noting, storing things for later. During one of these weeks I planned a novel out with my post it note method too. But after the week away from the keyboard I was itching to get back into it.

JL: Getting organised is a bit of a work in progress for me. Are you one of those lucky people to whom organisation comes naturally?

LL: In life I am very organised. I am a lists and diary man. I have a weekly to do list (it’s so much more flexible than a daily one which always seemed to leave me disappointed or feeling guilty) which I update throughout the week, adding and crossing things off. I have separate sections in the list: writing, life, UK Meet, other.

In my writing I am also pretty organised, with character biogs and notes I add to as I write, scenes planned in post it notes for the whole novel, even character arcs if I’ve got lots of characters and need to keep track of what happens to each of them during the whole story. So yes, I suppose you could say I am organised. But I like it that way, it helps me get things done, and feel I’m moving forward with things.

And Then That Happened

Should you settle for a nearly perfect happiness or put your heart on the line for more?

It’s 1999 and 28-year-old Dominic’s carefully planned suburban life with his boyfriend Luke is perfect. His job as a nurse, his best friend Matt, his relationship with his parents, everything is just right. He and Luke have been together ten years, seen each other through friends’ deaths and their parents’ ups and downs, and even had a commitment ceremony.

Gabe isn’t happy with his boyfriend, but he stays with him, because, well it’s complicated.

Fate throws Gabe into Dominic’s life. And then that happened. Gabe’s open relationship, impulsive nature, enthusiasm for life and straight talking advice are fascinating to Dominic. They’re friends, they click over a shared love of Goldie Hawn and Gabe shows Dominic there can be more to life than planned and safe. So why can’t he take his own advice?

And Then That Happened is about finding a new kind of happiness, even when what you have is already perfect. And how sometimes perfect isn’t quite what it seems.

Liam lives, with his partner and cat, where east London ends and becomes nine-carat-gold- highlights-and-fake-tan-west-Essex.

He writes gay romance with British humour and lots of sparkle. He’s a cat lover, an amateur baker, a classic car enthusiast, a camp trashy film lover, and a reader of escapist glitz, autobiographies and various other low brow fabulousness.