Under the Mistletoe Christmas Drabble and Giveaway

In honour of the season, the tireless RJ Scott invited me to take part in her Christmas event, in which a number of m/m authors (not sure how many, but my guess is somewhere in the order of umpteen) are writing & posting Christmas drabbles/flashfics (length of their choosing) about some of their characters.

I’ve been spending my time, of  late, mostly in the 1920s—no, I’m not the Doctor’s latest companion; I’m undertaking an extensive revision of an old novella, coincidentally also set at Christmas, Dulce et Decorum Est. (More on that, as they say, anon.)

So I was delighted to pen for you a little addition to my Midwinter Manor series, also set in the 1920s. This story is set in between Poacher’s Fall and Keeper’s Pledge, and takes place a year after the first book.
Under the Mistletoe – Christmas 1923 with Danny and Philip

A year after their first meeting, Danny and Philip revisit old memories

Danny looked up from the pheasant coop he was mending, into a round, earnest face. “Aye, Tommy, what is it?”

“Mrs Standish said to tell you you’re wanted up at the house, if you’re not too busy.”

“Then I’d best be going.” Smiling, he stood, and dusted off his trousers. “You run along ahead and tell ’em I’m on my way.”

The lad was small for his age, and Danny reckoned if it came to a race he could beat him hands down, but it wouldn’t do for the new gamekeeper to be caught larking with the gardener’s boy.

Then again, wasn’t it Christmas in two days time? Grinning, Danny launched into a run. “Come on, lad,” he urged the startled boy as he raced past. “That the fastest you can run?”

They reached the kitchen garden in a dead heat, owing to Danny taking pity on the boy, whose delighted laughter cut off abruptly at the sight of the lord of the manor himself, Philip Luccombe, awaiting them just by the gate.

Danny’s smile grew broader as he touched his cap for form’s sake. “Afternoon, sir,” he said as the lad sloped off back to his duties.

“Good afternoon, Costessey,” Philip said, echoing his smile. He was well bundled up in greatcoat and muffler, Danny noted with approval, and his breath steamed in the frosty air. “I wondered if you would walk with me? There are, ah, one or two things I wanted to discuss.”

Colour rose in Philip’s pale cheeks at Danny’s teasing, but he simply nodded, and they strode off briskly.

“And what might be these matters?” Danny asked once they were into the woodlands, a safe distance from the house and garden.

Philip gave a shy smile. “Not yet. Just a little farther.”

Intrigued, Danny let Philip lead him on. The ground was iron-hard under their feet, and although it hadn’t yet snowed, the air was thick with the scent of it. If the world wasn’t white when they woke up tomorrow, Danny would eat his hat. Even the birds and the woodland creatures seemed to be holding their breath in anticipation; the silence out here had a waiting quality about it.

“Here we are,” Philip said in a tone of satisfaction.

Danny looked around him—and laughed. They’d come to a clearing, where stood the old oak tree that had been the source of all the change in his life a year ago. One year to the day, he realised. He looked up at her treacherous branches, bare of leaves but heavy with a round clump of mistletoe, even bigger than the previous year’s crop. “If you’re about to ask me to climb up and fetch you some mistletoe, I’ll be begging to decline. I’ve learned my lesson of that tree.”

“Good Lord, no. I wouldn’t hear of it.” Philip moved closer. “But I thought we might commemorate the anniversary with a kiss.”

Danny’s heart melted. “Aye, that we might,” he said, and pulled his lover gently into his arms. 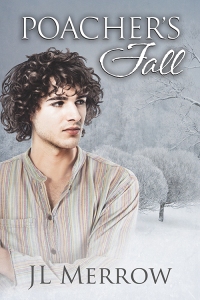 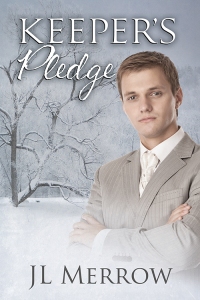 One snowy night just before Christmas, 1922, poacher Danny Costessey rounds off a night trapping rabbits by climbing a tree to fetch some mistletoe for his mother—only to fall and break his leg. Taken to the manor house to recover from his injuries, Danny meets the reclusive owner, Philip Luccombe. Village gossip has it Luccombe went mad during the war, but Danny soon realizes he’s simply still mourning his late lover. As friendship grows between them, Danny starts to fall for handsome, shy Philip.

Danny’s lively nature, roguish good looks, and ready laughter enchant Philip, and he finds himself being drawn out of his shell whether he will it or not. But when Danny tries to move beyond friendship, Philip panics—and his rejection threatens not only their happiness, but Danny’s health.

Giveaway:  I’m offering a copy of BOTH books in the Midwinter Manor series, or an alternative of winner’s choice of an e-book from my backlist, to a randomly-chosen commenter on this post. I’ll make the draw at around tea-time on Monday 15th December.  Good luck! 😀

43 Responses to Under the Mistletoe Christmas Drabble and Giveaway