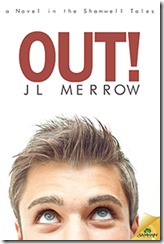 It’s the final stop on the Out! blog tour (*sniffle*) and today I’m visiting Joyfully Jay to talk about a few things I learned when researching for my non-binary character, Lex, in Out! – in particular, how the English language copes when neither “he” nor “she” is an appropriate pronoun to use.

All commenters on the guest post will be entered into the prize draw:

I’m offering a prize of an ebook of the winner’s choice from my backlist to one lucky commenter at EVERY stop on the tour, plus a grand prize of a signed paperback copy of Played!, the second Shamwell Tale,which was the first one to feature Patrick from Out! I’m happy to ship worldwide, and I’ll throw in some small goodies as well.