Rainbow Snippets heads for the stables

My snippet this week is taken from my historical short story, Brass Rags, which will be coming out as a standalone e-book for the first time on Sunday 3rd April and is now available to pre-order. It’s a very tongue-in-cheek tale of a young gentleman with, ahem, unusual tastes looking for love—or at any rate, lust—in low places:

Buggered, Algy thought sadly to himself some time later, was the one thing he was not. He kicked moodily at a dandelion—or possibly a rhododendron; horticulture had never been his forte—as he strolled through the rather lovely grounds of Blithering Coombe, Cedric’s father’s estate. It was a damned shame it hadn’t worked out with Hibbert—in many ways, he’d been the ideal servant: discreet, reliable and a stevedore in the sack.

Where on God’s green earth was Algy going to find another man like that?

As so often when his thoughts turned to potential lovers, Algy found his feet had turned towards the stables. There were so many interesting things to be found there—whips, bridles, assorted arcane items of leather and brass, their purpose lost in the mists of time…Algy adjusted himself hastily in his trousers. 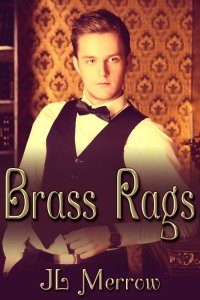 In early twentieth century England, a good valet can be damned hard to come by—at least, when one’s requirements are quite so specific as Lord Algernon Huffingham’s. Algy likes a man with a firm hand. Preferably work-calloused, and applied with vigour to Algy’s aristocratic buttocks. He’s beginning to despair of ever finding a man who can give him what he needs and still respect him in the morning.

Disgraced footman Robert likes a roll in the hay as much as the next man. Preferably with the next man. But he’s more accustomed to following orders than issuing them—and some of his lordship’s requirements are a bit more extreme than he’s used to! Robert may be easy on the eye and flexible in his morals, but will he be able to rise to Algy’s challenge?

This story first appeared in the Men of the Manor anthology, and is due out as a standalone ebook for the first time from JMS Books 3rd April 2016

If you’ve got the anthology, this edition of the story is almost exactly the same as the one you have already.

22 Responses to Rainbow Snippets heads for the stables