Rainbow Snippets is really at the Rugby

So in honour of that, I’m giving you a snippet today from my 4th Plumber’s Mate mystery, Blow Down, with Tom (normally a diehard fan of “proper football, played with a round ball like God intended”) and Phil enjoying an England rugby match screened at a pub:

I was trying to grill Phil a bit about his family, get some tips on how best to make ’em like me—or at least, to not piss them off too much. I mean, I did okay with Jase, but this was Phil’s mum. It was important, yeah?

But every time I tried to bring up the subject, some bugger with legs like beer barrels would make a tackle, or score a try, so I s’pose it wasn’t surprising Phil kept getting distracted. I mean, who wouldn’t?

Couple that with the testosterone boost of our side winning, well… I’m sure you get my drift. Not that me and Phil were all over each other while we watched or anything—Phil’s not into public displays of affection, and neither of us is into getting gay-bashed—but let’s just say we had a very good night after we got back to mine.

Blow Down – #4 in the Plumber’s Mate series 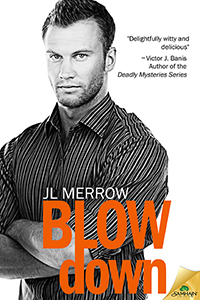 Death is what happens while you’re making other plans.

The last thing newly engaged plumber Tom Paretski needs is to stumble over another dead body. He’s got enough on his mind already as the reality of his impending marriage sinks in. Not only is his family situation complicated, his heroism at a pub fire made him a local celebrity. Now everyone and their uncle wants a piece of his psychic talents.

Hired to find a missing necklace, Tom and his fiancé, private investigator Phil Morrison, wind up trying to unmask a killer—and there’s no shortage of suspects, up to and including the local bishop himself.

As Tom and Phil try to uncover the truth, they find themselves pulled in all directions by the conflicting pressures of their families and their own desires. But the murderer they’re up against is a ruthless schemer who won’t hesitate to kill again. If Tom and Phil aren’t careful, their love—and all their plans for the future—could be blown down like a house of straw.

Due out from Samhain Publishing 12th July 2016

Available to pre-order:  Samhain | Amazon | ARe

9 Responses to Rainbow Snippets is really at the Rugby