The Spice of Life – interview with giveaway

I’m delighted today to welcome my very good friend Penelope Friday to the blog. Pen is one of the people who’s helped me hugely in my writing career – she was there right at the beginning, not only helping me believe in myself but also with the practical stuff such as how to find out where to send stories.

Like me, Pen writes both gay and lesbian fiction – she has two historical lesbian novels in print as well as more short stories and novellas than you could shake a very large stick at – and right now she’s celebrating the imminent release of her hot and steamy m/m collection All About the Boy from Nine Star Press.

Jamie: Pen, welcome to the blog!

One thing that’s always interested me is the intersection between romance and erotica – and the very broad spectrum both can cover. Anyone who’s read my books knows I tend as a rule towards the vanilla end of that spectrum – can you give us an idea of what flavours to expect in All About the Boy?

Pen: Thank you for having me (and saying far too nice things about me – people should take that with a pinch of salt!) But oh dear, *blushes* I’m afraid this is a little bit kinkier 🙂 I’ve written all over the spectrum, but this antho concentrates fairly firmly on domination and submission, and – well, the way that makes the characters feel.

I like to explore the bits of us that many people have but don’t admit to, or don’t feel they can admit to. This is quite a fun anthology for showing the ways this might work, in that it runs from someone finding out for the first time what they like to someone for whom submission is an actual lifestyle choice. So it also shows how differently things can play out. Kink isn’t just about sex, but about who you are – it’s not a ‘one size fits all’ thing, and exploring characters through kink is – well, different from the way you explore your characters, but hopefully still a valid way!

Jamie: As ever, you’re way too modest! I’d definitely agree that showing a character’s kinks is an excellent way to reveal them to the reader – stripped, as it were, completely bare! 😉 And I’ve always loved the idea of different “takes” on the same subject, giving it a good, thorough poke and prod… *g*

But “getting it right”? Does any author ever get it all completely right?

Jamie: Excellently put!
Pen, it’s been great having you here – and good luck with the new release! 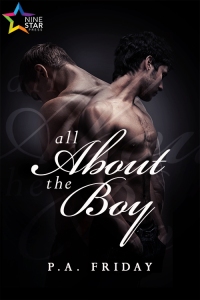 All About the Boy

Some men like gentle loving—others like to switch up the power. In P.A. Friday’s collection of stories, explore the raunchier, edgier side of lust—a space where domination and control can be the greatest turn-on.

From Stefan finding out the hard way just how straight he isn’t, Jake who has to learn to behave or take his punishment, to Kel juggling two very different lovers at his workplace, doing what you’re told has never been sexier.

Due out July 25th

Usually, Jake liked to do as he was told. He obeyed Alessandro’s every whim and behaved impeccably—especially in the presence of his master’s friends.

It was not because he feared punishment that he did so, either. Far from it. It was because he loved the look on his master’s face when Jake was obedient. That expression of pride in his boy—in Jake—and the warmth of his smile. Jake would do anything for that look.
Still, there was one of Alessandro’s friends to whom Jake couldn’t take. No matter how many times he met the man, he didn’t warm to him—had, in fact, an instinctive revulsion towards him. In his presence, the temptation to disregard his usual obedience was always strong. It wasn’t the fact that Leo had once been Alessandro’s lover—Alessandro had had, and continued to have, any number of lovers. Indeed, with Alessandro’s permission, several had played with or been pleasured by Jake. But when it came to Leo, the rules changed.

Check out Nine Star Press’s events calendar for information on additional blog stops for All About the Boy and other upcoming releases!

8 Responses to The Spice of Life – interview with giveaway