Oops! I have a feeling I’ve missed a few weeks of posting snippets. I blame everything on UK Meet eating my brain, coupled with having to kit out the youngest Merrowlet for sixth form (and that was a drama in itself) and see the firstborn off back to Uni (sniffle).

So in keeping with the back-to-school theme (and because I’m currently writing Shamwell #4) here’s a snippet from my first Shamwell Tale, Caught!  featuring hapless teacher Robert:

All was peaceful for a moment as I carried on shepherding form 2E into St Saviour’s Church, tins and jars for Harvest Festival clutched in tiny hands. Thirty pairs of eyes (actually, twenty-nine and a half; Jodie was wearing a patch for her lazy eye) searched eagerly for sight of parents and grannies. I gazed out on the sea of female and/or wrinkly faces in the pews and wondered idly if there was any job in the world, anywhere, that was worse for meeting men than the average primary-school teaching post. Father confessor in a nunnery, maybe? Avon cosmetics rep? Or one of those poor sods who went round emptying the sanitary bins they put in ladies’ loos?

[As this is a gay romance, it’s probably not a spoiler to say he meets his man on the very next page! *g*] 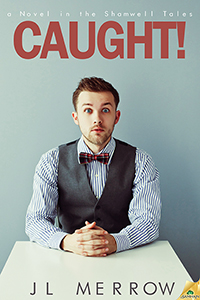 You can run from the past…but the past runs faster

Behind Robert’s cheerfully eccentric exterior lies a young heart battered and bruised by his past. He’s
taken a job teaching in a village primary school to make a fresh start, and love isn’t part of his plans. But he’s knocked for six—literally—by a chance encounter with the uncle of two of his pupils.

Sean works in pest control, rides a motorbike, and lives on a council estate. On the face of it, he shouldn’t have anything in common with Robert’s bow-tie, classic-car style and posh family background. Yet Robert is helpless to resist Sean’s roguish grin, and a rocky, excruciatingly embarrassing start doesn’t keep the sparks between them from flaring.

Despite Robert’s increasingly ludicrous attempts to keep his past where it belongs, his past hasn’t read the memo. And soon his secrets could be the very things that drive Sean away for good…

Warning: contains the alarming misadventures of a pest control technician, a stepsister with a truly unfortunate name, and a young man who may have more bow ties than sense.