Slam! is out today

My Rainbow Award-winning romantic comedy, Slam!, is out today in second edition, with its lovely new cover by Garrett Leigh: 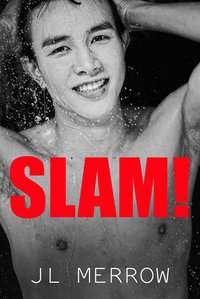 Amateur poet Jude is a carnivore working in a vegan cafe. His little dog, Bubbles, is the only man in the Anglo-Japanese graduate’s life—but Jude yearns from afar for “Karate Crumpet”, a man who runs past the cafe window every Saturday night leading a martial arts class. Jude’s swept off his feet when he’s rescued from muggers by the object of his affections—and when Jude finds out the calm, competent, hunk of muscle is also gay, he’s in seventh heaven.

Trouble is, the universe seems to be conspiring to stop them getting together. While Jude’s ready to jump straight into bed with his saviour, David’s still got one foot in the closet and wants to take things slowly. Then there’s Jude’s best friend, who has a dangerous secret, and his mother, who’s desperately trying to keep her own love life on track by lying about her age—meaning Jude has to pretend to be a schoolboy!

With a maze of different stories to keep straight, a potential stepfather to keep happy, and ex boyfriends who keep turning up on dates, Jude’s getting increasingly confused. Poetry in motion, it’s not!

exclusively on Amazon & on Kindle Unlimited

Note: this book was previously published by Samhain Publishing. This second edition contains only minor revisions.

And in case you missed it: my Shamwell Tales all have shiny new covers too, revealed today on Sinfully Gay Romance Book Reviews.