I’m off to see Dinosaurs in the Wild today, which is billed as a time-travelling adventure going back 67 million years into the past. I’ll try not to kill off the ancestor of all humankind while I’m there. 😉

So this week’s snippet is from Trick of Time, a novella whose hero, Ted, just nipped out of the Criterion Theatre for a crafty fag only to find himself back in the 1880s. (See a previous snippet here). Ted’s told himself it must be a film shoot–but then he asks his colleague about it:

I jerked my head in the direction of the door. “All that out there. What is it, anyway? Another BBC Dickens revival?”

[Rob] shrugged and shifted from his seat to come stand in the lobby with me. “Don’t know what you’re on about. No one told me about anything. So what are they up to?”

“Well, just look,” I said and opened the door to show him.

Rob peered out. “What am I supposed to be looking at?”

I looked over his shoulder. For the second time tonight, I stood there open-mouthed.

Piccadilly Circus was back to normal. 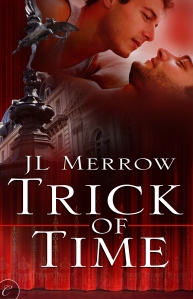 A lover from another time

When Ted Ennis steps out the doors of the Criterion Theatre for a cigarette and finds himself in Victorian London, he begins to doubt his sanity. At first he thinks it’s all a film set, and is sure that the strikingly handsome young man leaning against a lamppost must be the leading man…

What starts as a sordid transaction with a beautiful rent boy quickly turns into something much deeper, drawing him back again and again as he gets to know Jem and craves meaningful encounters with him.

But Ted doesn’t understand the exact conditions necessary for his trips through time—and for Jem, time may actually be running out. Now Ted has one last shot to get back to Jem and save their relationship, before it’s too late…

Also available as an audiobook on Audible.

12 Responses to Rainbow Snippets is travelling in time (again)