It’s Pride month (depending on where you are) so this week’s snippet is taken from my Plumber’s Mate short story The Drag Queen Wore Red, which features Tom Paretski getting mixed up in mayhem at London Pride:

It was like trying to run through custard. Which was actually kind of an appropriate thought, seeing as how most of the crowd was, in varying proportions, hot, colourful and downright tasty. Everyone and his puppy-play pal was out on the streets of Soho for Pride, and most of ’em were wandering down Old Compton Street in the wrong bloody direction.

The right direction being, obviously, the one I was trying to chase after a would-be murderer in. He was dressed as an angel, in gold lamé shorts and matching wings, which you’d think would help him stand out in a crowd. Generally speaking, you’d be right.

In the middle of Pride? Not so much. 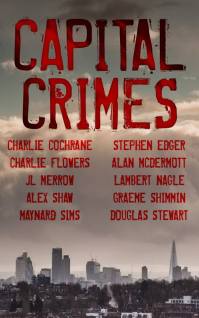 “For anyone whose literary tastes run to the dark and the twisty, CAPITAL KILLS is a damn near perfect taster menu.” – Simon Toyne – international bestselling author of the Sanctus trilogy

Contains my story The Drag Queen Wore Red, a short story in the Plumber’s Mate Mystery series (set between Heat Trap and Blow Down)