Psst! Don’t tell anyone, but I’m not actually here; I’m in Gloucestershire (if all has gone well) watching a re-enactment of the Battle of Tewkesbury. But I didn’t want to miss giving you this week’s Rainbow Snippet – and as Camwolf was re-released yesterday, that’s where this one comes from.

Here, Nick Sewell, lecturer at Cambridge University, is talking to his best friend and colleague, Nadia, about Julian, the student he’s got a crush on:

“Now, I’m not one to gossip—” Nadia acknowledged the lie with a devilish twist to her mouth “—but judging from his essays, that young man’s seen entirely too much of the darker side of life for a lad his age. Wouldn’t want to be adding to his troubles, would we? Coffee?” She didn’t wait for an answer, simply pouring him a cup. “And don’t forget you’re coming round for dinner next week. Marjorie’s got a new recipe she’s simply gagging to try out on you.”

Nick smiled. “How could I forget? I’ll be there, Nads.”

She winced. “Nick, darling, please don’t call me that. It makes it sound like you’re talking to your testicles.” 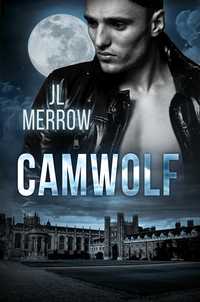 A race to save his lover—by becoming his own worst nightmare.

Dr. Nick Sewell has it all. Good friends, a career as a Cambridge academic… and recently, a tendency to turn into a wolf every full moon.  When a new student arrives from Germany, Nick is horrified by his visceral attraction to the troubled youth—not to mention his violent jealousy when he sees Julian with another man. He’s floored to find out Julian is a werewolf too.

Unlike Nick, Julian has spent his life among other wolves, and in this subject, he’s the teacher and Nick the student. Nick struggles to adjust to this reversal of roles, especially since he’s an alpha and Julian a natural submissive. That dynamic just adds to the attraction smoldering between them, whether they’re in human form or wolf.

But Julian’s pack and the abuse he suffered isn’t far behind him, and the pack wants to reclaim him. For Nick to hold on to his lover, he’ll have to embrace the monster within.