Rainbow Snippets is getting ready for Christmas

I’m at that odd stage in the Christmas preparations which I like to call the lull before the inevitable last-minute panic, when I’ll suddenly remember something I’d forgotten I’d forgotten!

It’s a couple of days before Christmas 1922, and after a hard night’s poaching Danny just wants to fetch some mistletoe for his mam from where it’s growing on an old oak tree.

What could possibly go wrong? 😉

Taking his knife from his boot and shoving it between his teeth for ease of access, Danny began to climb. It took him a couple of goes before he grasped the lowest branch, but once he’d done that, he was able to swing himself up onto it. Blinking snowflakes out of his eyes, Danny reached for the next branch, and the one after that, and soon he was level with the clump of mistletoe he was after. It looked a sight farther along the branch from here than it had from down below. Wishing he had some gloves, Danny started to inch along toward it.

Suddenly his foot slipped. His stomach lurched with it. 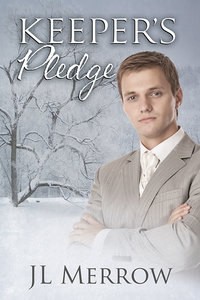 One snowy night just before Christmas, 1922, poacher Danny Costessey rounds off a night trapping rabbits by climbing a tree to fetch some mistletoe for his mother—only to fall and break his leg. Taken to the manor house to recover from his injuries, Danny meets the reclusive owner, Philip Luccombe. Village gossip has it Luccombe went mad during the war, but Danny soon realizes he’s simply still mourning his late lover. As friendship grows between them, Danny starts to fall for handsome, shy Philip.

Danny’s lively nature, roguish good looks, and ready laughter enchant Philip, and he finds himself being drawn out of his shell whether he will it or not. But when Danny tries to move beyond friendship, Philip panics—and his rejection threatens not only their happiness, but Danny’s health.
Keeper’s Pledge

13 Responses to Rainbow Snippets is getting ready for Christmas