Rainbow Snippets is enjoying the snow

Not that there’s snow in Hertfordshire, at least not as I write. But I hear there’s plenty of the stuff in other parts, and in this hemisphere it’s certainly the season for it. So today’s snippet comes once again from To Love a Traitor, which is set in the winter of 1920. Here, undercover investigator George-ne-Roger is perhaps having a little too much fun in the snow with the man he suspects of spying in WW1, Matthew:

George turned the toboggan around and set it at the top of the slope. It was a beauty—elegantly constructed out of wood, with a seat about three feet long set above sturdy, curved runners. He seated himself upon it, and Matthew slung a leg over and sat down behind him. It felt curiously intimate for such an absurdly innocent affair—Matthew’s legs were either side of George’s, and his chest was pressed up against George’s back, his good arm around George’s waist. Thank heaven for layers of clothing between them.

“Right, I’m set,” Matthew said in his ear, the warmth of his breath tickling the back of George’s neck. 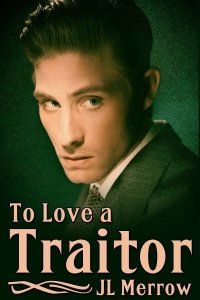 Wounds of the heart are the hardest to heal

Solicitor’s clerk George Johnson has a secret goal when he moves into a London boarding house in the winter of 1920: to find out if his fellow lodger, Matthew Connaught, was the wartime traitor who cost George’s adored older brother Hugh his life.

Yet the more he gets to know his quarry, the more George loses sight of his mission—and his heart. Blessed with boyish good looks and charm in abundance, ad man Matthew is irrepressibly cheerful despite having lost an arm in the Great War—and soon makes plain his attraction to George.

Matthew’s advances become ever harder to resist, and George tries to tell himself his brother’s death was just the luck of the draw, and to forget he’s hiding secrets of his own—including who he really is.

But as George’s feelings for Matthew grow, so does his desperation to know the truth about what happened that day in Ypres.  Even if it means he’ll lose the man he’s come to love.

8 Responses to Rainbow Snippets is enjoying the snow