I’m delighted to be taking part once again in RJ Scott’s Autism Awareness Blog Hop, and this year’s theme is Childhood Toys.

Nearly two-thirds of children with autism between the ages of 6 and 15 have been bullied.

For more facts about autism, and details of all blogs participating in the Autism Awareness Project, see RJ Scott’s master post here: rjscott.co.uk/autism19 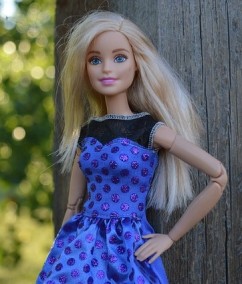 It’s funny how what you play with as a child can be a clue to what you’ll be like as an adult. As a girl—and in spite of my massive tomboy phase—I loved playing with my Pippa dolls. For the non Brits, Pippa was like a smaller version of Barbie popular in the 1970s (yep, showing my age here!) Like Barbie, she had an endless succession of outfits you could buy, and swap with your friends. Not content with them, I used to hand-stitch extra clothes for her. I was anything but an accomplished seamstress and I can’t remember how most of them turned out, but for some reason the outfit I made after seeing Raquel Welch’s fur bikini in One Million Years BC sticks in the mind. I only had bright blue fur fabric available, so it was certainly eye-catching!

My daughter, by contrast, never clicked with dolls of any kind—or sewing, for that matter. Her cuddly toys had a far more exciting time than Pippa and her friends ever did, going on perilous adventures in space (laundry detergent bulbs made excellent helmets) or mountaineering with Action Man (he was the one with the climbing gear).

And nowadays? True to form, DD, now uni age, is a confirmed jogging-bottoms-and-t-shirt girl. (I’m still waiting to see on the space travel and mountaineering.) And me? I’m sitting here in a dress. And over to the left of me is a half-finished bustle I’m making to wear at a steampunk event in the summer. Well, it could be worse. At least it’s not a fur bikini! 😉

Giveaway: I’m offering a free e-copy of my third Porthkennack novel, Love at First Hate, to a randomly chosen commenter on this post.

Just leave a comment on this post (wherever you see it) including your email address by 25th April to be in with a chance – and please do check out the other posts on RJ’s list for more giveaways! 😀

Bran Roscarrock has been living in the closet all his life. As heir to an expansive family legacy in the town of Porthkennack, old-fashioned ideals of respectability and duty were drummed into him since childhood, and he’s never dared to live—or love—openly.

Sam Ferreira, an old friend of Bran’s brother Jory, is a disgraced academic desperate to leave his dead-end job. When Jory asks him to take over as curator of a planned exhibition on Edward of Woodstock, the fourteenth-century Black Prince, Sam leaps at the chance to do what he loves and make a fresh start.

But Bran’s funding the exhibition, and though sparks fly between the two men, they’re not all happy ones. Bran idolises Prince Edward as a hero, while Sam’s determined to present a balanced picture. With neither of them prepared to give ground, a hundred years of war seems all too possible. And if Bran finds out about Sam’s past, his future may not be bright, and their budding romance may be lost to history.