You See, But You Do Not Observe

Autism fact: To a person whose sight is Hyposensitive (under-sensitive), objects appear quite dark, or lose some of their features. Their central vision may be blurred but peripheral vision quite sharp – or a central object is magnified but things on the periphery are blurred.

I’m delighted to be once again taking part in RJ Scott’s autism awareness blog hop, which runs throughout the month of April.

As I’m sure you’re all well aware, the title of this post comes from Sherlock Holmes, speaking to the long-suffering Doctor Watson in “A Scandal in Bohemia”, The Adventures of Sherlock Holmes, by Sir Arthur Conan Doyle. (Feel free to imagine it in Benedict Cumberbatch’s sepulchral tones.)

A fuller version reads as follows:

“You see, but you do not observe. The distinction is clear. For example, you have frequently seen the steps which lead up from the hall to this room.”

“Well, some hundreds of times.”

“Then how many are there?”

“Quite so! You have not observed. And yet you have seen. That is just my point. Now, I know that there are seventeen steps, because I have both seen and observed.”

How often do we see, but not observe, in everyday life? I was recently asked about the accessibility of venue where my local writers’ group meets by a wheelchair user. To my shame, I had only a very imperfect recollection of the number of steps involved—and I wasn’t alone; two other members of the group, who have been visiting this place regularly for even more years than I have, had, if anything, even less of an idea than I did—one of them even thinking they recalled a stairlift being there. Perhaps there was one there at some time; there certainly isn’t now, as we found when we visited with, this time, our eyes open to observe.

So how can we learn to observe, as well as see? 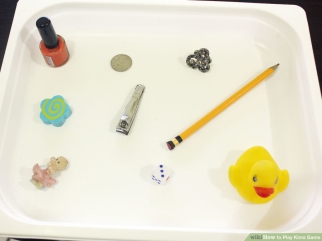 Most of us have probably played Kim’s game, at one time or another: for those unfamiliar with the Jewel Game from Rudyard Kipling’s Kim, it involves trying to memorise a number of objects placed on a tray and seen for only one minute. Repeated attempts can help you train your memory, and it’s often played with young children.

For Kim, this was serious business, and part of his training as a spy. The game is apparently still used as a training method for snipers by the US Marine Corps in Quantico (although possibly not with rubber duckies).

Why do we need to train our memory in this way, though? Why don’t we just naturally remember everything we see? It’s probably because there’s an inevitable trade-off between focussing on the detail, and seeing the big picture.

Speaking in evolutionary terms, it’s likely to be less advantageous for us to notice that there are fourteen trees of various heights in front of us, six birds flying up in alarm, a growling sound becoming louder all the time, an animal coming our way at around 30 miles an hour, etc, than it is to register immediately that there’s a sabre-toothed tiger about to eat us and we need to take evasive action now.

And noticing all the details at once can be incredibly overwhelming. Which is the reality of daily life for some people with autism. For a few examples, check out this recent blog post by the mother of an autistic child: http://metro.co.uk/2016/04/02/violet-fenn-8-things-that-are-just-too-much-for-those-with-sensory-issues-5777826/

Make sure you check out RJ’s blog to see the complete Five Senses Blog Tour schedule.

And as we’re on a detective theme, I’m offering a prize of an e-copy of EACH of my currently published Plumber’s Mate Mysteries (Pressure Head, Relief Valve and Heat Trap) to one lucky commenter on this post. I’ll make the draw after the end of the month. Good luck!

9 Responses to You See, But You Do Not Observe