Permanently Legless is out in second edition

The second edition of my short story about a disabled veteran, Permanently Legless, is now available in a shiny new cover from JMS Books 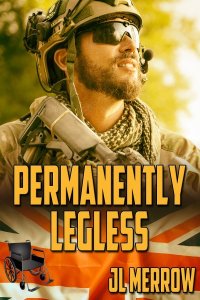 The Taliban may have taken both Chris’s legs, but he came back from Afghanistan with his sense of humour and his lust for life firmly intact. The one thing that can shake his confidence is meeting Josh, the one-night stand from before his tour of duty he hasn’t been able to forget.

It turns out Josh hasn’t forgotten Chris, either. He spent the time they were apart fearing the worst every time a soldier was reported killed in action—and wishing Chris would use the number Josh gave him, and call.

Josh’s delight on seeing Chris again quickly turns to shock on seeing his injuries. With Chris such a changed man, can they still have a future?

Reviews for the first edition:

‘Permanently Legless’ is another great example of J.L. Merrow’s ability to make a character come so alive you think you can touch them – Serena Yates, Queer Magazine Online

I loved Chris’ voice throughout this story… I loved his attitude and his frankness and he cracked me up multiple times. –   JayHJay, Joyfully Jay.

And for a limited time only, it’s available at 20% off from JMS Books.

Note: this second edition is almost exactly the same story as that previously published by Amber Quill Press. So no need to buy again. Unless you really like that cover.